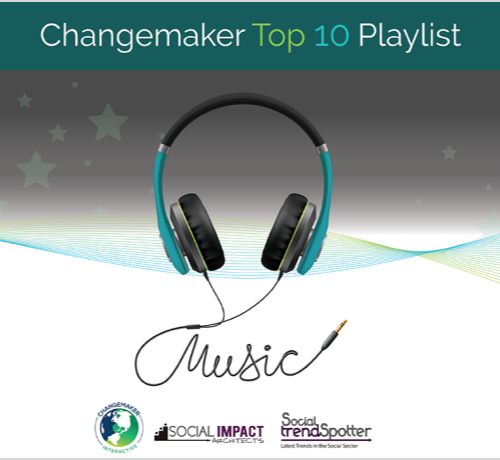 My storytelling medium is words, but I have always been inspired by music. Music is a language universally shared. In fact, the human brain can distinguish music from all other noise. Research has proven that it has an impact on human health and performance, including reducing stress. This week, as we enter a long holiday, I thought I’d take a break from my usual fare and curate a Changemaker Top 10 Playlist with my fellow Trendspotters who come from four different generations from across the nation.

The idea came from my new UK friend, Waistcoat Dave, founder of @CompassionateTroublemaking. I was honored to be a guest on his recent podcast  where we spoke about my Social Alchemy framework as well as the highs and lows of being a social entrepreneur. Without further ado, here is the Changemaker Top 10 Playlist (available on Spotify):
“A Change is Gonna Come” – written by Sam Cooke, performed by Lizzo (submitted by Amanda Basler)
I have always loved this song, but Lizzo’s version for One World: Together At Home takes it to a whole new place.
“Stand Up” – written by Cynthia Erivo and Joshuah Brian Campbell, performed by Cynthia Erivo (submitted by Ben Leal)
I challenge you to not feel empowered by this song and beat.
“Changes” – by David Bowie (submitted by Jeff Herrington)
I learned about David Bowie from my older sisters and have always been mesmerized by his originality. This song is no exception.
“Chicago / We Can Change the World” – written by Graham Nash, performed by Crosby, Stills & Nash (submitted by Christopher King)
This song reminds me that, while things may seem bad now, we have been through tough times before and need to keep fighting when we see injustice. Graham Nash is an artist and many of his songs and photographs still inspire me today.
“Waiting on the World to Change” – by John Mayer (submitted by Debbie Brock)
I use this song in my class to provoke discussion about change – should we wait or be the change? Who has the power to create change? Who decides what you believe? Is it about progress or about perfection? All good questions for those new to changemaking.
“Change” – by Damoyee Janai (submitted by Catherine Cuellar)
This song celebrates one of my favorite topics for fellow entrepreneurs – “When you fall, get back up.” I call it the “bounceback” factor. It is a perfect song for the times we are living in.
“Here Comes the Sun” – written by George Harrison, performed by The Beatles (submitted by Pam Gerber)
This song, written by George Harrison, is the most streamed Beatles song. It was written when he had a quiet moment with one of Eric Clapton’s guitars in April 1969 after a long winter. The song reminds me that tomorrow is a new day filled with promise and sunshine.
“A Million Dreams” – written by Benj Pasek and Justin Paul, performed by Pink (submitted by Kelly Firesheets)
Changemakers are crazy by definition. This song is the first that embodies how it feels to be a social entrepreneur – “We can live in a world that we design.” As I said in the podcast, changemaking is not a profession, it is a compulsion.
“What a Wonderful World” – written by Bob Thiele and George David Weiss, performed by Louis Armstrong (submitted in memory of Karen Blumenthal)
It has been covered by many, but none can top the original. When asked why he chose to perform this song, he said: “If lots more of us loved each other, we’d solve lots more problems.” He creates a vision with his words of a better world.
“Imagine” – written by John Lennon (submitted by Sommer Neff)
Every changemaker list includes this one. The intro alone gets to me. If you want to hear another special version, check out the one by Lady Gaga performed at the National Equality March. It is haunting and inspiring all at once.
Thanks to everyone who submitted ideas for this piece – your submissions and notes were touching. As I was writing it, I was devastated to learn that changemaker, friend, author, journalist and fellow Dukie, Karen Blumenthal passed away unexpectedly earlier this week. Her family noted in her obituary that we could honor her by “working to repair the world and enjoying a great cookie.”
I hope over the next few days you get a chance to relax (hopefully with a great cookie), take a moment to listen to this inspirational music (via Spotify), and are refreshed, so you can come back to our work of creating a better world together. And, if we missed any of your favorites, we hope you will share them!