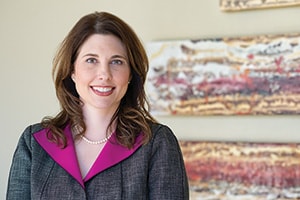 Originally published by The North Texan – Careers with a Cause, March 7, 2016

As a student attending UNT’s Texas Academy of Mathematics and Science, Suzanne Smith (’94 TAMS) felt like she had found her place.

Now Smith has turned those attributes into her life’s mission. She is founder and managing director of Social Impact Architects, a Dallas-based firm that helps nonprofit organizations build strategies to reach their goals.

After graduating from TAMS, Smith earned a government degree from the University of Texas at Austin. She worked as planning director for Phoenix House, a substance abuse agency, and as a national advocate for the American Heart Association. But she saw a consulting need that wasn’t being filled in the nonprofit sector and decided to get her M.B.A. at Duke.

“When I was in the nonprofit field, there weren’t any consulting groups that knew what we needed,” she says. “I thought, ‘What if I start a firm that understands the nonprofit industry, including all the demands for staff, resources and fundraising, and provides high-quality strategy plans? That’s what I set out to do.”

After graduating in 2008, she founded Social Impact Architects, working with organizations across the nation to help them develop plans, collaborations and metrics to build a stronger social sector. She’s currently working with After the Bell Alliance, a group that wants to increase the number of young people in quality after-school programs in Dallas.

Smith, who also works as an adjunct professor teaching social entrepreneurship in the College of Business at UNT, enjoys making keynote speeches at conferences. She was even invited to give a TedX talk, “Everybody Can be a Changemaker.”

She says goals in the nonprofit sector can be hard to quantify compared to the private sector, where the focus is on making a specific profit.

“People think working for a nonprofit is easy. It’s a lot harder,” she says. “What is ‘making a difference’? It’s a lot more complicated, so I find it a lot more challenging.”