How to Build a (Social) Revolution: Hacks from Tech Innovators – Part 1 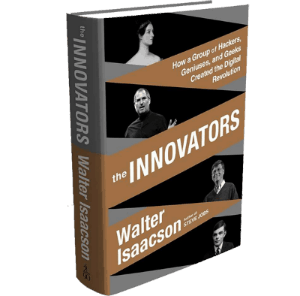 When he won the Nobel Prize for his work on laser technology, Charles Townes quipped, “It’s like the beaver told the rabbit as they stared at the Hoover Dam. ‘No, I didn’t build it myself. But it’s based on an idea of mine.’” Cheekiness aside, this clever remark hints at the escalation of ideas that define innovation.

In his recent book and serial biography, The Innovators: How a Group of Hackers, Geniuses and Geeks Created the Digital Revolution, American author Walter Isaacson takes an entertaining and informative look at how innovation (and failure) propelled technological advances during what is being called the third industrial revolution. He begins with Ada Lovelace, who pioneered computer engineering in the early 1800s, and follows the series of inventions (e.g., the microchip, the Internet) of the digital revolution through the lives and lessons learned by Alan Turing, Doug Engelbart, Tim Berners-Lee, Steve Jobs and Bill Gates, among others.

I picked up the book hoping to be inspired and yearning to find clues to help spur the social revolution that is upon us; I was not disappointed. Part 1 of this blog discusses the book itself and the lessons we can learn from it about innovation. After Thanksgiving, we will share Part 2, a call-to-action for the social sector and how we can create our own revolution.

The Innovators focuses on six central concepts that were key to the development and success of the digital revolution. They included:

IDEAS – Innovation is often connected with a new idea, but the technology innovators – as illustrated by the beaver quip – borrowed ideas from everywhere and simply built upon them. For example, while technology is most notably science-based, Isaacson notes that the best innovators took cues from the arts as well. However, this free flow of ideas didn’t always establish a clear purpose for innovations. In fact, the innovators of the digital revolution often invented a device (e.g., the microchip) first and then determined how it should best be used.

PEOPLE – The tech industry has produced some notable personalities that have inspired other industries’ efforts around innovation. Many of the innovators had what Steve Jobs and others at Apple called “reality distortion field,” where the work made the impossible seem possible. Individuals possessing a unique combination of attributes – passion-followers who were decisive, energized by failure, yet loved having fun – helped propel reality distortion forward.

TEAMS – In early America, we had a culture of altruism and mutual support. Think barn raisings and quilting bees. While the technology industry is characterized by stories of intense competition, the book showcases the opposite. As Isaacson put it, “innovation comes from teams more often than the light-bulb moments of lone geniuses.” The technology revolution was built through collaboration, often spurred by physical proximity and multiple disciplines coming together to “hack” a problem and offer solutions.

CROSS-SECTOR COLLABORATION – The technology revolution was accelerated by cross-sector collaboration between universities, private industry and the military to produce deadline-driven results. While military objectives were often the driver, the accelerators were strong personalities who served as “bridgers” and the “bumblebees.” Bridgers, like Vannevar Bush, who led the U.S. Office of Scientific Research and Development during World War II, had the ability to translate among scientists, engineers, government and private industry. Bridgers helped each group understand their role in the larger cause. In Bush’s case, his outspoken advocacy for government support of science led to the creation of the National Science Foundation. Bumblebees, like Alan Kay, worked tirelessly across disciplines and platforms to create new ideas. Although Kay was a computer scientist for Atari and Xerox, he also worked at Disney and was a musician and composer. Like many of the innovators profiled, he took inspiration from many disciplines and collected, improved and collaborated on half-formed ideas, pulling from multiple sources.

BUSINESS MODELS – Because of the technology industry, we have the concept of the new dynamic duo – the visionary paired with the business mastermind. Many of the innovations profiled in the book would never have seen the light of day if the innovators had not paired up with individuals who understood how a product could work for consumers. Isaacson profiles many of these duos in the book, highlighting the necessity to combine product usefulness with marketing expertise to make it appealing to and affordable for consumers.

ECOSYSTEM – The role of environment to spur innovation, or as Isaacson calls it, “the right primordial soup,” was just as critical to the digital revolution as the innovators were. He discusses the evolution of Silicon Valley and what made it successful – the universities, the venture capital funding and the collection of different, but connected groups – from hippies to hobbyists – that saw computers as a way to give people power. From this “soup,” ideas were formed and molded, inventions were refined and products went to market.

All of these concepts are noteworthy in their role in the digital revolution, but the book notes one thing that served as the foundation upon which the revolution was built: tension. For many, tension has a negative connotation, but as a means for promoting innovation, it is often necessary. It creates a dynamic environment where positive interactions can lead to continuous improvement. During the digital revolution, many tensions existed, from the struggle between focus and flexibility in idea creation to the push and pull of vision and business in taking an idea to market. Ultimately, these tensions helped shape the revolution and resulted in the digital world we live in today. If you have ideas to share on these six central concepts we’d love to hear from you.