3 Pieces of Wisdom from the Greek Drama 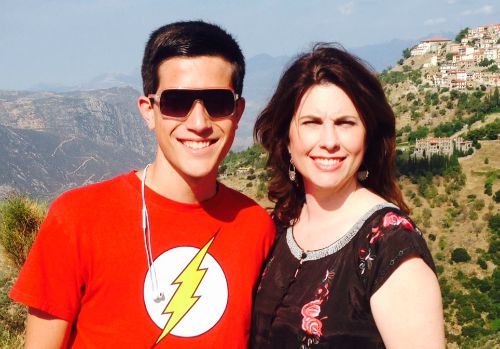 The economic situation in Greece has been in the headlines since 2010, but it reached a boiling point this summer when Greece became the first developed country to not be able to repay an IMF (International Monetary Fund) loan. Earlier this month, I visited Greece as a chaperone for my brother-in-law’s nonprofit, Summer of Service, where he not only teaches about world history, but ensures his high school students (including my nephew, Gabe, pictured to the right) truly experience history. We were all collectively awestruck by the achievements surrounding us in Greece – the Acropolis, Delphi, the site of the first Olympic games. But it caused me to wonder – how could a country that invented democracy have regressed to a point of collapse?

While headlines suggest that the Greek crisis is purely economic, its roots are subtler and illustrate how social, cultural and political issues contribute to economic failure. Although the roots of the crisis began before 2008, Wall Street’s implosion fueled the fire, bringing Greece, and several other countries in the euro zone, to their knees. A year later, in October 2009, Greece announced that it had been understating its deficit figures for years. Myriad and complex factors, including Germany’s role as the EU’s financial guardian and disciplinarian, an extraordinary number of uncollected tax receipts and perceived corruption in the Greek government, contributed to the country’s economic woes. To help stabilize Greece, the IMF, European Central Bank and the European Commission provided Greece with two bailouts. While the bailouts prevented bankruptcy, they didn’t allow for the government to invest in a turnaround. The consequence of these actions led to a retraction in the Greek economy and a staggering 25 percent unemployment rate. All of this has led them to where they are this summer – a classic Gordian knot.

Based on my analysis of the situation, these issues have root causes that are important lessons for all of us:

Know thyself: Greece has an amazing past of innovation and initiative, but the Greeks have forgotten this identity. Greece, unfortunately, stalled as a culture through numerous foreign invasions and, as one expert told me, “got stuck in the Middle Ages.” It is clear to me that they still have not leveraged technology and other advancements to spur economic growth. In my opinion, they do not lack for raw materials, but are held back by tradition, history and politics. It is an important reminder to all of us of Charles Darwin’s famous quote – “It is not the strongest of species that survive, or the most intelligent, but the one most responsive to change.”

Stand a little out of my sun: The Greeks are a proud culture and, like all of us, have a tough time admitting mistakes and accepting help. As we have discussed in the past, we often get caught in the trap of ego-thinking versus eco-thinking. Many experts suggest that Greece’s crisis is less of an economic crisis, but a political crisis where egos and corruption have prevailed. Because the unemployment rate is so high, especially for Greek youth (more than 50 percent for people ages 15-24) I am concerned by the exodus and disconnectedness of the Greek youth. While the bailouts are being hammered out and debated, Greece is losing its future leaders and that, in the end, will be the true crisis. An important test for any country – or organization – is how it supports and empowers its millennials and gives them a chance to “stand in the sun.”

Consult silence: When we visited Delphi – the site of the famous Greek oracle – you felt history surround you. It was here that many Greeks historically “consulted silence” and came to reflect on their lives and ask difficult questions of themselves and their gods. It is time for the Greeks to again ask these difficult questions and make sacrifices to ensure their future. They need to tighten their belts and enact real reform to reduce corruption; invest in technology, innovation and business; and choose societal well-being over personal gain.

Finally, this Greek drama seems distant from our own situation in the United States. But, is it? Are we asking the difficult questions and making the long-term investments to ensure our culture evolves, compromises for the greater good and empowers our future generations? Or, are we getting caught in partisanship, ego and short-term rewards? We’d love to hear your thoughts. If visiting Greece with a bunch of teenagers taught me anything, it is that the future is bright, but it is up to the current generations in power to make sure they are set up for success.  Join us next week as we discuss Boards Behaving Badly.