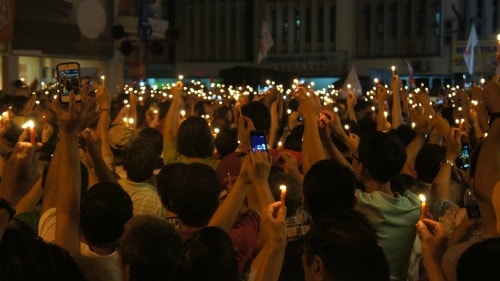 The latest report released this week from Cause and Social Influence, “Influencing Young America to Act”, reveals a number of interesting insights on major social issues and how Gen Z and millennials view them. One insight in particular caught my eye: most young Americans question whether individuals can make a difference in the climate crisis, but those who are active in the environmental movement believe individual action is extremely important and they also hold government and corporations responsible for solving the climate crisis.

This mimics my findings in the classroom. When my students and I discuss any issue – gun control, BLM, climate change – they use the framework I taught them and discuss the issue as social entrepreneurs. What is the problem? What are the underlying causes? What does the research say? Why are we stuck as a society? Why are we still stuck as a society? But, in the past few years, I have noticed a difference. My heart sank when I finally understood why.
The (mostly) millennial students in my social entrepreneurship class have never experienced real social change. They have grown up post-9/11, fearing terrorists and school shootings and being overwhelmed by all the social issues. My generation – Generation X – remembers when driving without seat belts was the norm, smoking in restaurants and offices was commonplace and drunk driving was the leading cause of traffic deaths. I know social change can happen because I witnessed it firsthand, and I helped shape it. This post is as much a reminder to me as it is a lesson for my students that real social change can and does happen when we carefully craft it.
When social issues impact all of us, champions – including courageous young people such as Greta Thunberg – stand up, alert us to the problem and create movements. In the case of drunk driving, it was a mother, Candy Lightner, who lost her 13-year-old daughter, Cari, in 1980 because of the actions of a drunk driver. She channeled her grief into establishing MADD (Mothers Against Drunk Driving), which led to heightened awareness and the passing of legislation to raise the legal drinking age to 21. Because of her efforts and that of many courageous advocates across the country, drunk driving fatalities have been cut in half – from 21,000 in 1980 to 10,142 in 2019 – saving more than 300,000 lives. It is one of our proudest public health victories and is being replicated worldwide. But how did we get this change to happen in such a short amount of time?
In studying the success of social movements like MADD, researchers found and perfected a model that accelerates the pace of social change – the socio-ecological model. I call it the “social ripple effect,” based on Mother Teresa’s quote: “I alone cannot change the world, but I can cast a stone across the waters to create many ripples.” It provides a comprehensive framework for understanding and modifying the range of social and environmental factors that affect individual human behavior. It shows that, while individual behavior change is challenging and something we still are trying to understand, humans are shaped overwhelmingly by our environment. It mirrors what young Americans said in the survey results – individuals are at the center of social change but we need to act on all levels to really create meaningful, sustainable change. Each level is critical, and interventions are more effective as they address risk and protective factors at multiple levels in concert with one another. The social ripple effect model showcases the synergy needed to create large-scale social change – where we can co-create an environment that supports individual change, and individuals can create a chain reaction that stimulates change within their environment. 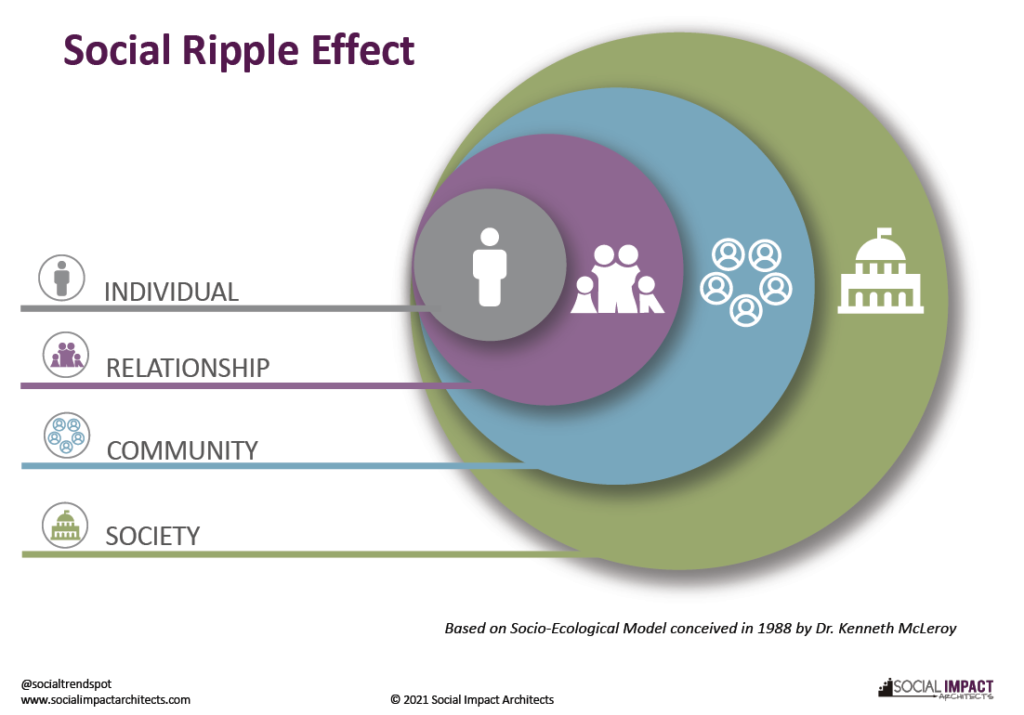 To illustrate this model, it is helpful to observe the efforts to reduce drunk driving by organizations like MADD over the last four decades. Through coordinated efforts that focused on individual change as well as complementary efforts at the societal policy level, they created a social and physical environment that became intolerant of drunk driving. Using the model, here are some efforts that exemplified their strategy:
Individual:
Relationship (also called lnterpersonal):
Community:
Societal:
The social ripple effect (or socio-ecological model) has evolved beyond public health and is now used more universally in areas such as domestic violence, obesity and chronic disease, and early childhood development. As illustrated above, the social interventions that target the outer levels of the model (i.e., community, societal) can improve individual status by modifying underlying factors that influence the individual. This often yields greater impact than focusing on the individual alone.
We encourage organizations and communities working toward large-scale social change to chart their efforts against this model and look for ways to take them to the next level. As Mother Teresa noted, each level can “create many ripples” and cumulatively those ripples can lead to change that matters. We welcome your input on this model as well as others that move your work forward.