Martin Luther King Jr. and the Power of Social Movements 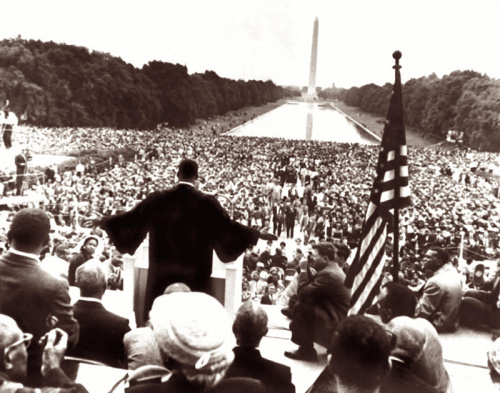 As we celebrate the birthday of Martin Luther King Jr. next week and witness the power of the recent movements in the last few years, we are reminded of the importance of social movements to our country’s evolution. Movements were believed to have started in the late 1800s around workers’ rights, eventually leading to the labor movement in the 1930s. Social movements began addressing additional social issues, including the civil rights and women’s movements in the 1960s. The concept of movements has gained momentum in the 21st century with new (or re-imagined) social issues emerging, e.g., breast cancer awareness, #MeToo, gun rights & gun control, and Black Lives Matter. To frame this discussion and ensure we learn the lessons of the 20th century, we thought we’d share some insights on the five elements needed for a movement, the three people needed and how a movement can evolve.
In the book, Power of Change, authors Luther Gerlach and Virginia Hine describe the five elements needed to forge a movement. To illustrate their concept with a real-life example, we will discuss how anti-tobacco advocates turned their cause into a movement to change America’s mindset on tobacco.
Common Motivator: Previously unconnected individuals or groups unite around a common belief or motivator. In the anti-tobacco movement, a diverse group of individuals (e.g., mothers, cancer survivors, doctors) united with organizations, such as the American Cancer Society, to organize around reducing the impact of tobacco products in America.
Recruitment: Individuals and organizations use their social networks to recruit friends and family to the cause. Within a decade, public sentiment changed from either a neutral or supportive stance to an overwhelmingly anti-tobacco stance. Now, with social media platforms, this recruitment process is even easier.
Commitment: Strong connection to the cause is fueled by personal experience. Anti-tobacco advocates made the issue personal by advancing research on the negative consequences of secondhand smoke.
Synergy: Diverse groups learn about each other and join forces. One of the major reasons that the anti-tobacco movement was successful was because everyone owned it, and various groups came together on a plan of action.
Fight: Real or perceived opposition. Campaigns, such as the award-winning Truth campaign, helped the tobacco movement create an anti-establishment feel through defeating “Big Tobacco.” 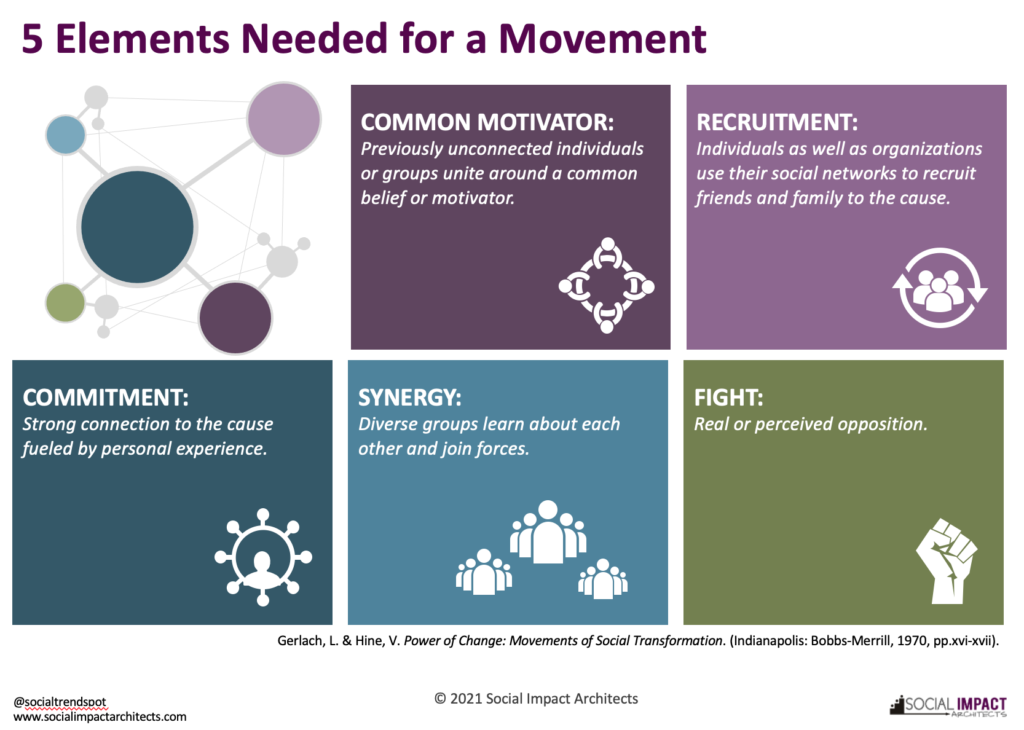 Movements are different from collective impact or coalition-building because they are bottom-up approaches to social change. They often use impactful marketing techniques, such as campaigns, to build momentum and grow public recognition and activation. They are led by people who have special skills to inspire and connect others, e.g., Martin Luther King Jr.’s role in the civil rights movement. In The Tipping Point, Malcolm Gladwell describes individuals needed to create change or a “tipping point” – “that magic moment when an idea, trend or social behavior crosses a threshold, tips and spreads like wildfire.” In the social sector, we believe that these three people help forge a movement:
Connectors: these individuals know everyone and bring people together around the cause.
Mavens: these individuals are “databanks” of information and share it widely.
Salespeople: these individuals know how to shape the message effectively to gain traction. 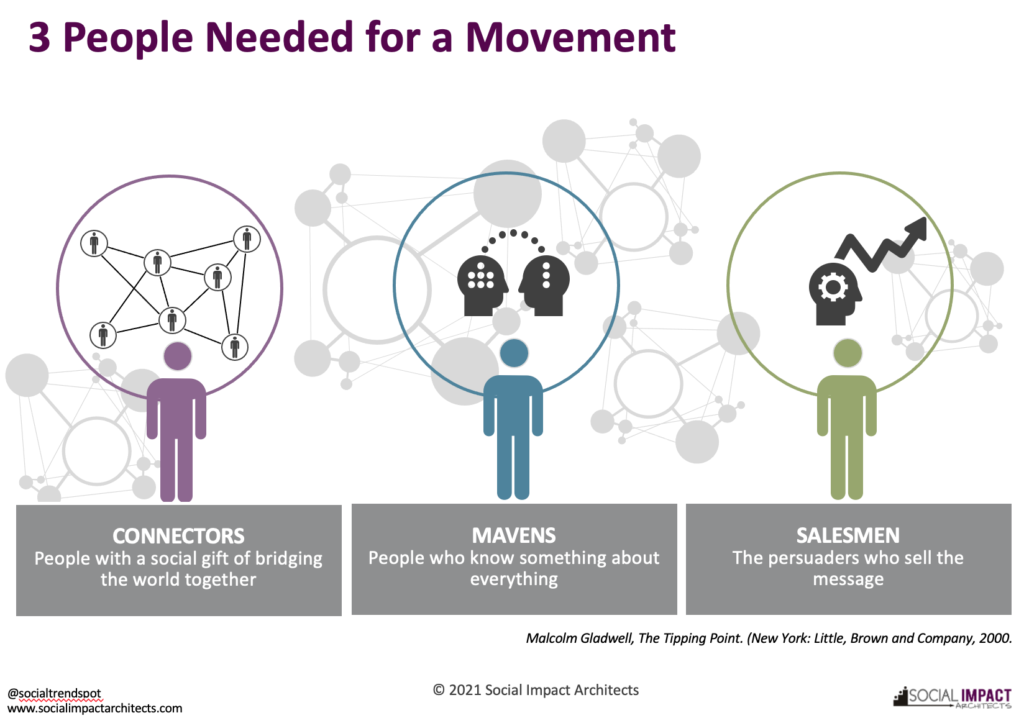 Nationally and locally, movements take social causes to a new level by gaining widespread acceptance and creating societal ownership of the outcome. They start small and build over time – starting with a mere good intention and growing into a campaign and then a movement. The following chart shares how they often grow and evolve over time. 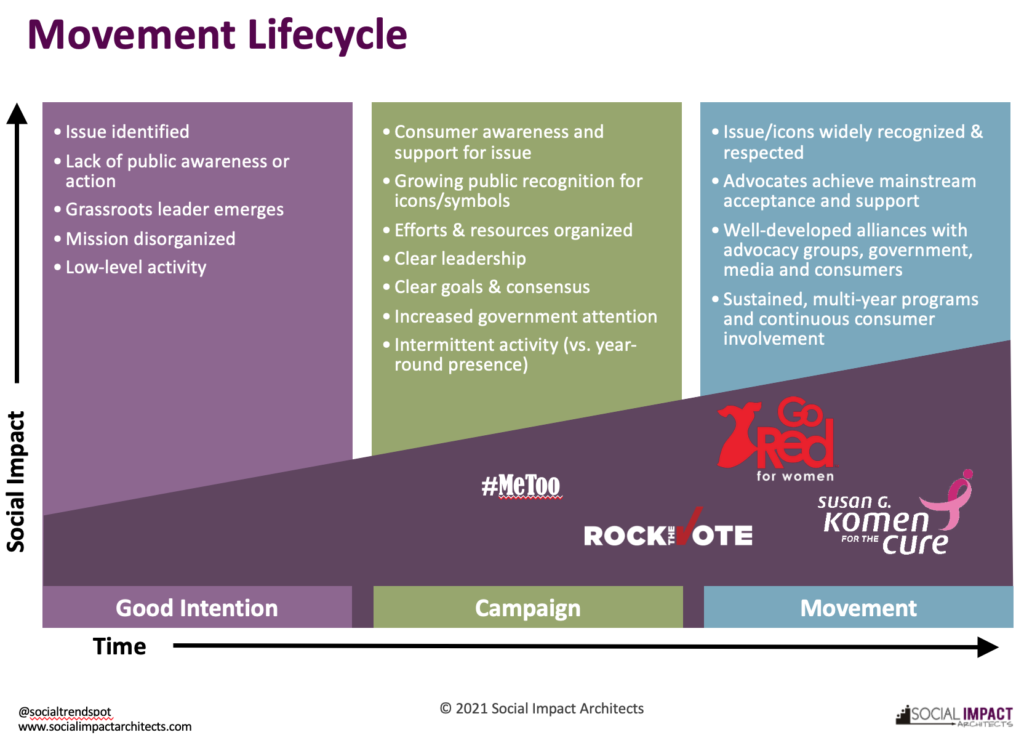 As we celebrate the social movements of today, we find that common motivators, people and progress really do create a “tipping point” that can move us toward greater social change in the 21st century. We would love your reaction to these themes and to hear more about the ways you are creating movements for the greater good in your own communities.