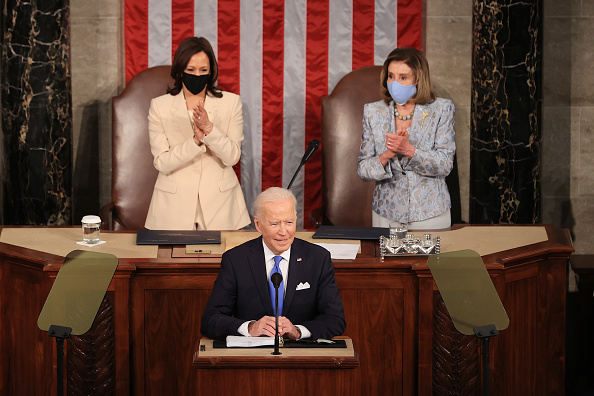 Like many of you, after every presidential speech and opposition rebuttal, I am struck with two feelings: 1) inspiration for the power of prose in presenting new ideas and 2) bias toward action. I could not fall asleep last night with ideas and possibilities swirling in my head, so I wrote down my thoughts and decided to share them with you today. After President Joe Biden’s Inaugural address, I challenged his administration as well as a bipartisan Congress to take on some key issues, and it was evident in last night’s address that they had risen to the challenge.

First, let’s take a moment to reflect on progress. I’m confident that while we will likely forget exactly what was said tonight, we will always remember the image of President Joe Biden flanked by two women leaders – Speaker Nancy Pelosi and Vice President Kamala Harris. Party aside, this was a historic moment and one to be celebrated. I encourage all of us to pause and ensure that all young women witness this moment as we continue to dismantle the barriers women face in achieving their potential. Likewise, the speech covered two issues that continue to disproportionately impact women, including:
1) Childcare & Early Learning – for working women and families to succeed, we need to reimagine our system of childcare. We need to recognize why women disproportionately had to drop out of the workforce during the pandemic but also acknowledge that this is not a new trend. We have handicapped women because we don’t have a system that supports working parents – period. We also have to be careful that as we expand universal pre-K that we don’t unintentionally destroy our system of daycare providers which comprises largely women- and minority-owned businesses that were struggling to make their business models work before the pandemic. As a social sector, we need to lead efforts to build a childcare and early learning system that works.
2) Domestic Violence & Child Abuse – we have done so much to raise awareness on domestic violence and need to expand this fight to include all violence. The Oscar-nominated movie, “Promising Young Woman,” showcases how much farther we need to go to shift social norms. Reauthorizing the Violence Against Women Act is a good start but doesn’t go far enough. There is an undeniable link between domestic violence and child abuse, and we must address these systemic issues together. We must also extend these protections to transgender and non-binary people. The statistics are deplorable – one in two transgender individuals are sexually abused or assaulted at some point in their lives. We must put a stop to all violence. As a social sector, we need to be unified in our response. When violence happens to one of us, it happens to all of us, and we need to respond accordingly.
Second, I have written extensively about my political career as a lobbyist, political candidate and now as a citizen trying to make a difference. I have voted for and worked with Republicans, Democrats and many others in between. In my experience, blame is a collective race to the bottom, and it is the primary reason we are deadlocked in many of our important political discussions. To win, especially in the face of challenges, we need to create hearts-and-minds campaigns that unite us with a common sense of destiny. Last night’s speeches – reminiscent of previous speeches by Franklin Roosevelt and Abraham Lincoln – did just that.  President Biden eloquently said:
“Our Constitution opens with the words, ‘We the People.’ … With light and hope, we summoned new strength and new resolve. To position us to win the competition for the 21st Century. On our way forward to a Union more perfect. More prosperous. More just. As one people. One nation. One America.”
Senator Tim Scott echoed these sentiments, saying:
“We need policies and progress that bring us closer together. To govern for all Americans, no matter how we voted.”
I’m hopeful that these speeches turn the corner in the partisanship that has gotten in the way of “we the people” making progress. I encourage all of us – especially as social sector leaders – to be “upstanders,” call out the blame game when we see it and refocus discussions toward a shared sense of purpose and the greater good.
Finally, I believe our rapidly changing economy necessitates a direct connection between our education and workforce strategies. In fact, I would argue that they are now twin strategies that should be integrated into one collective system. I have also noted in the past that technology and social justice stand at the intersection of these and other social issues. President Biden and Senator Scott covered these topics well in their plans for rebuilding America. In particular, I have high hopes for bipartisanship on greater access to community college to build and retrain our workforce as well as physical infrastructure plans. However, one thing was missing from both speeches – mental health. Jobs have been lost. Businesses have faltered. Millions have lost loved ones. First responders have experienced extreme exposure to stressful work environments. As Senator Scott said, “This past year, I’ve watched COVID attack every rung of the ladder that helped me up.” Our country has gone through an emotional upheaval, and I fundamentally believe that after we beat this virus we must successfully address the trauma associated with the pandemic and social upheaval. In January 2021, authors in Psychiatric Times defined “Post-COVID Stress Disorder” and encouraged their fellow practitioners to prepare for it. We as a social sector can help too by building awareness of and normalizing mental health issues, ensuring social and emotional learning happens in schools, helping first responder workplaces effectively deal with secondary trauma and advocating for mental health alongside healthcare benefits.
Like you, I’m still processing last night’s speeches – I would love to hear what stood out to you and how we collectively can rise to the challenge to address these pressing issues as a sector.