How to End Domestic Violence and Abuse 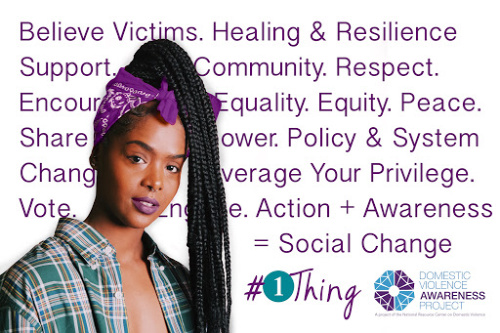 Domestic violence has been on the nation’s consciousness for the past four decades for good reason. More than one in three women (35.6%) and more than one in four men (28.5%) in the U.S. report having experienced rape, physical violence and/or stalking by an intimate partner in their lifetime. Nearly three out of four Americans personally know someone who is or has been a victim of domestic violence. October is Domestic Violence Awareness Month and is used to rally communities to come together around tackling the issue. Although domestic violence and abuse often happen behind closed doors, local and national nonprofits have heroically brought the issue to light and launched programs to reverse these trends. In fact, between 1993 and 2010, the overall rate of domestic violence dropped nearly two-thirds and laws have been passed to address issues such as dating abuse in the workplace, stalking and employment discrimination.

But, as the times change, the movement continues to fight new threats, such as online abuse. To that end, Futures Without Violence, in partnership with the Department of Justice’s Office on Violence Against Women and the Advertising Council, launched a new public service announcement called “That’s Not Cool” aimed at starting the conversation about dating violence and abuse earlier – with teens – and covering topics such as digital dating abuse. Watch the video or take the Cool/Not Cool quiz to learn more.

We know that violence affects people of all ages from all races and socio-economic levels. With an estimated 20 to 30 percent of women experiencing domestic abuse (defined as a pattern of coercive, controlling behavior that is a pervasive life-threatening crime) in their lifetime, it is likely that victims, survivors and even batterers are among those we see every day. Abuse takes many forms: physical; emotional; economic; stalking and harassment; and sexual. To support an end to domestic violence and abuse, we must employ a variety of techniques and follow the research. Here are a few examples:

This month, we invite you to do #1Thing to turn our “awareness+action=social change.” And, we ask you that you share your wisdom with us on domestic violence and abuse initiatives that have worked in your community. We hope that this issue moves from behind closed doors to a movement that inspires us to action, where what happens to one of us happens to all of us.