Prescription from the Pulpit: What Pope Francis Teaches Us About Change 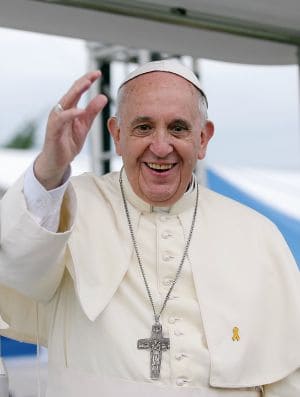 This week, many of us are celebrating the religious holidays of Easter and Passover. We have also witnessed the heartbreaking fire at the Notre Dame Cathedral. In this time of change, it reminds me of one of my favorite parables – Moishe and the Pope. Over a century ago, the Pope decided that all Jewish people had to convert or be forced to leave Rome, and the Jewish community was outraged. The Pope heard from them and struck a deal – he would have a religious debate with a designee from the Jewish community and if this designee won, they could stay. Because of the stakes, no one from the Jewish community volunteered, so they ultimately asked Moishe, who was an old man and had very little to risk. He only asked for one condition – that neither side could talk. Moishe spent his life as a janitor and believed actions spoke louder than words. The Pope agreed. So, the day came for the debate. Moishe and the Pope sat across from each other for a full minute of silence and then the Pope raised his hand and showed three fingers. Moishe in return raised one finger. The Pope waved his hand in a circular fashion over his head, and Moishe pointed to the ground. The Pope pulled out a communion wafer and a glass of wine, and Moishe pulled out an apple. The Pope stood up and declared, “I give up – this man is too good. The Jews can stay in Rome.”

After the debate, the Jewish community celebrated Moishe for achieving the impossible and asked how he did it. “First, the Pope said that the Jews had three days to get out of Rome. I replied that not one of us was leaving. Second, he told me that all the Jews must be cleared of the entire city. I replied that we were staying right here. Finally, he took out his lunch, so I decided to take out mine.”

We all come from different backgrounds and far-flung places, but we have one thing in common – our humanity. This parable showcases that during change we can seek compromise and build on our commonality rather than being divided by our differences.

The current pontiff, Pope Francis, has brought this home for many Catholics, and even non-Catholics. He has been a breath of fresh air, bringing new life to some of the deeply held traditions of the Catholic Church. His efforts to create change are a good case study for the social sector on how we may lead change management initiatives in our own organizations. Here are just a few of Pope Francis’ wins that we can borrow.

His Vision Represents Even the Least of Those Among Us

One of the reasons Pope Francis has been so successful at building urgency around a new vision for the church is that his followers sense that the vision he articulates is not his own, but rather one that represents many voices. He is known for living like an ordinary man, using public transportation and living among his fellow priests. By keeping open paths of communication with his constituents, the pontiff has been able to use his position to elevate issues like poverty and climate change. Since his election to the papacy in 2013, Pope Francis has been so consistent in using his voice for people who are marginalized that media outlets and the public at-large can predict what his message will be. A strong indicator of his success in change management is that his followers and the public alike know what to expect from the Pope. The vision is no longer his alone; it is also shared and articulated by his constituents.

He Preaches on Many Mounts

One of the most important steps in any change management initiative is spreading the message to everyone who will be impacted, and Pope Francis has excelled at this. Instead of remaining tucked away in an ivory tower, he goes out to the people, spreading his message and presenting his call to action. Any successful communications plan requires leaders to do the following:

Pope Francis has made numerous strategic visits in the past six years and has dedicated time at the pulpit to hammer home the message that the church and the world cannot remain the same. He has also been effective at tailoring his message to increase relevancy for his specific audiences. For example, on Palm Sunday, which was also World Youth Day, he urged young people to speak out when needed, but to remember why they speak rather than speaking out in order to be seen as a “superstar.”

He Models the Way Through the Narrow Gate

To sustain the changes we hope to make in our organizations, we have to anchor them in the organization’s culture and make decisions that are consistent with our ideals, even when they are tough. Pope Francis has made major strides in reshaping the Catholic Church by trying to do just that. In response to the Syrian refugee crisis, the Pope not only urged other nations to take families in, but also dedicated space at the Vatican to house families fleeing violence. As the leader of the church, he models the change and behavior he wants to see among his congregants. We need to emulate this in our own social sector organizations to propagate change.

We are excited to hear what more Pope Francis has to say throughout Holy Week. If you have been inspired by his grassroots efforts or if his leadership has prompted changes in your own organizations, please share your stories with us.