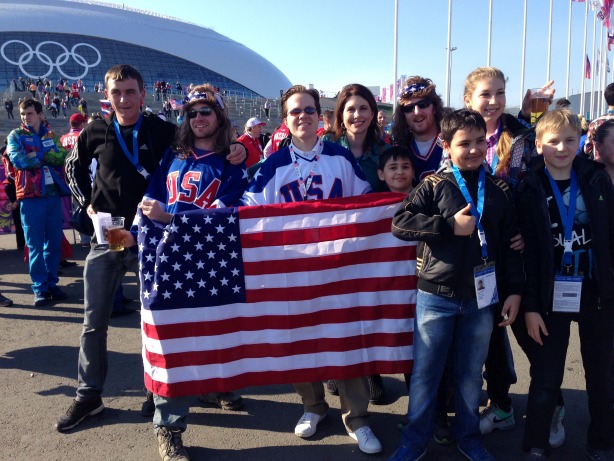 About the photo: Suzanne (center), along with a group of both Russian and American tourists, poses with the U.S. flag in Sochi.

When you think of the Olympics, a number of images come to mind — gold medals, athletes at the top of their game and patriotism. I was honored to attend the Winter Olympics in Sochi in 2014. Nothing prepared me for experiencing the Olympics in real-time in Russia — not NBC coverage, not other sporting events, not even international travel. It was quite simply the most “epic” experience I have ever had. With the opening of the 2018 Olympics on Friday, I want to revisit what I learned and share the three lessons in leadership that stood out most to me:

Lesson #1: True Sportsmanship Has No Boundaries

I was lucky enough to get tickets to the now-legendary hockey game between the U.S. and Russia in 2014. You’d expect major rivalry between the fans of the two countries. Instead, the game was a testament to true sportsmanship. Before and after the game, Russians were excited to take pictures with us and vice versa. (See the photo above.) For many of them, it was the first time they had ever met an American. While competition was intense on the ice, the crowd during the game was jubilant, but never offensive.

This was an incredible lesson in leadership, both on and off the ice. Why can’t we compete on the ice, but be civil off the ice? Whether in corporate offices or Congress, we all need to learn this Olympic lesson.

Spoice was the word trending after Sage Kotsenburg’s gold medal win in the 2014 men’s snowboarding slopestyle event. Spoice, according to Urban Dictionary, is “an exclamation of gratitude towards life. It’s the proper word to use when you find yourself in a situation involving a multitude of positive things at once. You may only utter it with pure joy behind it.” Kotsenburg won his medal by trying something he had never done before — the 1620 Japan Air Mute Grab. Why did he attempt this? He told NBC that it was because he wanted to set himself apart from his competition.

Competition does that – it makes us try new things and push ourselves forward. This is a great lesson for all of us: try new things, push boundaries and always “keep it spoice!”

Lesson #3: Always Get Up After a Fall

Figure skating is a favorite event of the Winter Olympics, but the sport has had its ups and downs. One of the toughest moments in 2014 was Jeremy Abbott’s fall during the men’s singles short program. However, one of the most inspiring moments is when he got back up and finished his program to the roar of the crowd.

We can learn a lot from Olympians like Abbott about taking chances — and, when they don’t result in success, getting back up to try again.

Now that the Olympics are starting again, I imagine we will see these lessons played out again and again. It is my hope that while we watch and are entertained by amazing feats of bravery that we also reflect on our own lives and find small ways to be equally brave. As Russian playwright Anton Chekhov said, “Knowledge is of no value unless you put it into practice.” What I learned from Olympians is that, while they may have extraordinary athletic ability, what makes them special is that they are all about action and practice – they take discipline to a whole new level. They remind us that nothing great happens without hard work, risk-taking and getting back up when we fall. We’d love to hear some of the leadership lessons for the social sector you’ve learned from the Olympics or other unexpected places.