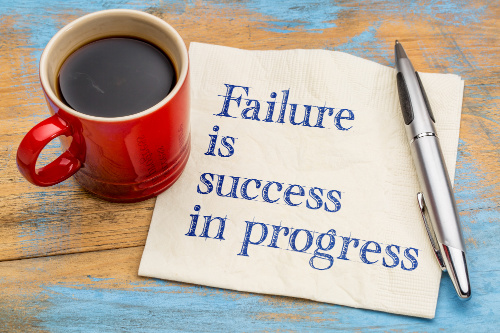 We were saddened by the loss of Supreme Court Justice Ruth Bader Ginsburg – both sides of the aisle admired her work ethic, perseverance and resilience. As we examine what made her unique, one theme rings true – she never let a setback deter her from her path. As Joe Biden put it, “She never failed. She was fierce, unflinching in her pursuit of civil rights for everyone.”
As witnesses to her extraordinary achievements, fiery dissents and remarkable life, we learned that if you keep a steadfast focus on your mission, learn from your mistakes and course-correct when needed, you never really fail.
Failure is a tough thing to bring up in the social sector. It is our F-word. We don’t talk about it or learn from it. I never realized how strange this was until I went to business school, where failure was considered a badge of honor. I learned there were venture capitalist firms that wouldn’t consider entrepreneurs’ ideas unless they had a track record of failure. Why? Because they knew that an entrepreneur with past failures had grit and knew how to learn from his or her mistakes. In my opinion, this fear of failure is holding the social sector back from greater success. The same goes for Ruth Bader Ginsburg – many of her failures (a.k.a., dissents) ultimately shaped her future successes. So, what is the secret to achieving this mindshift?
First, we must acknowledge the problem. And, part of the problem is the word itself and what it means when we fail. With high stakes in the social space, it is hard to admit when we have let down our clients, organizations and communities. That is why I love efforts to make failure more mainstream in the social space. One national example is the recent Be Fearless Hub, launched by the Case Foundation to “highlight the powerful, fearless stories of people who are making big bets and letting urgency conquer fear.” They are asking changemakers across the globe to share their stories around their Be Fearless principles. A smaller but nonetheless effective example of embracing failure was espoused by one of my favorite local fearless leaders, who was famous for asking grantees, “What is your fabulous failure?” Using “fabulous” before the word, “failure,” made it easier to swallow.
My own fabulous failure was when I led a team at the American Heart Association on childhood obesity. We had to move quickly and, because of that, mistakes were inevitable. I found it was hard for my team to come to me with these mistakes when it was still possible to fix them. So, I changed the mindset. Instead of calling them mistakes or failures – which are clearly loaded words – we decided to call them “skips in the CD.” For those who remember CDs, skips happened all the time, and you never knew the reason. So, when individuals came to me and said this, we instantly course-corrected without playing the blame game. Instead of focusing on beating ourselves up for making a mistake, we learned from it and fixed it. As they say in the corporate world, we learned how to “fail early and cheaply.”
Second, we need to acknowledge that failure has a real purpose as a driver of innovation and impact. Failure SHOULD be an option for the social sector. I often tell my students, “If you are not failing, then you are not taking enough risks.”  This goes for nonprofit organizations and for-profit ventures alike – we must all see failure as an opportunity to grow.
Third, we need to share our failures liberally to learn from them and then transform them into future successes.
Finally, we need to start a culture shift in the social space to get comfortable with failure and understand that failure is often just the first step toward insight, impact and real learning. Here are some quick tips on how to start this in your organization:
We would love to hear your opinion about failure and how you or your organization has embraced it as a norm. In my experience, if we take heed, learn and pivot, success is ours for the taking – and sharing. And, if you don’t believe me, believe Justice Ginsburg’s own words – “So often in life, things that you regard as an impediment turn out to be a great, good fortune.”