2017 Nonprofit Trends: Shifting our Focus to Entrepreneurial Thinking in Nonprofits 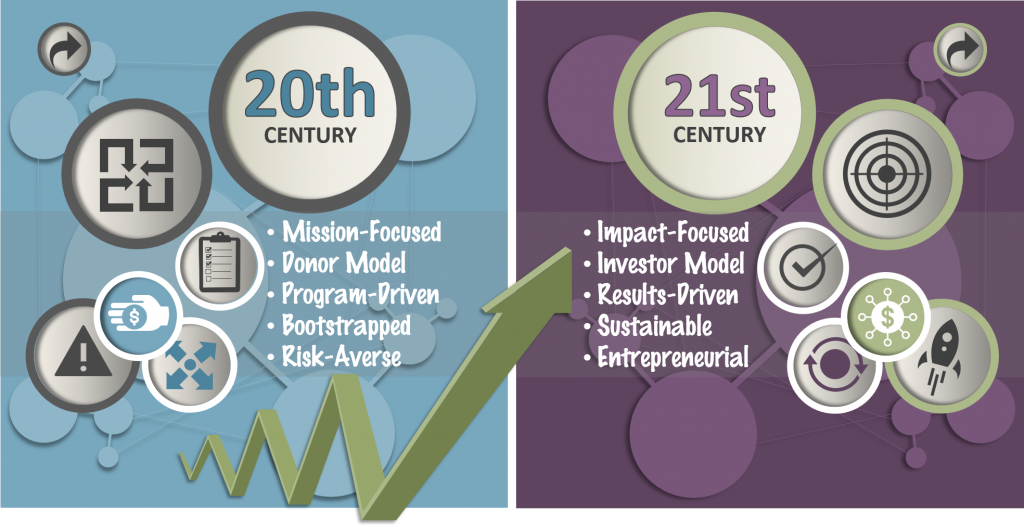 Over the holidays, I read about the history of the nonprofit sector in the United States. I did it because I believe that to predict the future, you must understand the past. It is a fascinating study on how organizations adapt to the times. In colonial days, Americans were suspicious of private institutions, such as charities, and favored public efforts. Later, with influences from Europe, voluntary associations, especially in New England, flourished to fill voids that the government left. Then, as the country entered the Industrial Revolution, charities became the dominant means of addressing social issues, such as slavery, alcoholism and other social reforms. Churches also played a key role in many of these reforms and started many orphanages, schools and social welfare organizations. In the late 19th century, we also saw business magnates like Andrew Carnegie, arguing that the “best means of benefiting the community is to place within its reach ladders upon which the aspiring can rise,” and building libraries, parks and museums. But, the sector as we know it was really ignited in the 20th century. Fueled by government subsidies and contracts to support social needs, 90 percent of nonprofits have been created since 1950.

In the 21st century, the social sector continues to grow. For example, the state of Colorado recently reported that the number of nonprofits in Colorado tripled in the past 10 years. To add to this disruption, we have also entered a new global economy – powered by technology, fueled by data and driven by knowledge. How will nonprofits adapt to the 21st century?

Each year, we predict trends in the social sector, and in 2017, we believe the strongest trend will be changing the mindset of the sector at an organizational level. To change means letting go of old ways of operating and welcoming new ways. Native Americans have called this concept survivance. It means redefining ourselves by holding onto our principles, while still embracing change. This year, we dedicate our 2017 word shifts to ways nonprofits as organizations can practice survivance in the 21st century:

History has shown us that the social sector is flexible and will rise to the challenges set forth by the times. We believe that the principle of survivance sets a promising course forward in the 21st century. By holding strong to our values and principles yet preparing for and welcoming change, nonprofits will better meet the needs of our most vulnerable citizens. If you missed our word shifts from 2013, 2014, 2015, or 2016, please check them out! We welcome your feedback on these or other word shifts. Future blogs will delve further into each of these topics, and, as always, we welcome your help as a TrendSpotter.